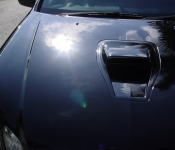 Hello everyone, the car today is a Mitsubishi Airtrek Turbo in metallic black, with the colour of the flakes similar to Honda’s Nighthawk black. Very soft paint and was easily marred if you are not careful with wiping.

Here is the car upon arrival. The swirls were more evident after a wash and clay.

Then K.Y from Osren came to deliver me some products and at the same time demonstrated a new-ish product they have. One that I haven’t seen or heard of before, a clay cloth! It is really easy to use, the downside is it’s rather large and you have to fold it to get into tight areas but it removes contaminants very quickly and covers a large area, so claying was a breeze on a big car like this. =)

He helped me mask off the engine bay for demonstrating on the hood.

This is then followed by another Osren polish (forgot it’s name) on a white Lake Country polishing pad.

It didn’t needed anymore after this but we gave it another hit with Menzerna 106FF with a Meguiar’s Finishing pad and finally followed by Osren’s Radiant Polish with a black Lake Country finishing pad.

After a few hours on the big hood,

The rest of the paintwork got compounded with Meguiar’s #85 Diamond Cut 2.0 on a Lake Country 4 ply twisted wool, followed by Menzerna 106FF on a Meguiar’s Polishing pad.

After polishing every panel, the paint is wiped down with M6000 Wax and Grease remover to remove any polishing oils that might fill and hide defects in the finish.

On the passenger side, there were defects that were under the clearcoat (any pros here please correct me if I am wrong on this). So this suggested that the passenger side doors and rear quarter has been repainted.

The swirling on the front door wasn’t too bad

Using a 3.5” wool pad near the door handles, and a behind the scene shot from the box office hit, Crouching Detailer, Hidden Scratches! xD

Passenger side front door after,

Passenger side rear door before,

After compounding and polishing,

Sorry as I forgot to take any halogen afters.

Then the sun revealed to me some spots that I missed on the front door,

So out with the 3.5” wool pad again and that area got sorted.

On the passenger side rear quarter panel, I notice there was some touch up paint on the edge of the fuel filler lid area. So I suspect the paint must be thin around the edges.

So the edges got taped up and compounded with 3.5” purple foam wool/M85 followed by 4” White CCS/106FF

The thick foam pad allows it to contour nicely with the slightly curved fuel filler lid.

Then the fuel filler lid itself is taped and the rear quarter panel is compounded and polished. Forgot to take before pictures on this panel.

And the touch up paint is still in-tact 😉

I placed an old wool pad under the boot so the edges are raised to make polishing easier.

Camera flash was used to show the afters because the ambient lighting is too bright for the halogens to show any difference. =)

The top of the rear bumper before,

The rubber seal is taped with a tackier masking tape because the less tacky ones used on the paint wouldn’t stick to the rubber, this is to prevent the sides of the foam pad from abrading the rubber.

And then, a bad thing happened. Because of my carelessness, I tried to buff the corner of the number plate area with the 4” pad, it is slightly larger than the curved area so as I try to push the pad in to the corner, I upped the speed and immediately there was a slight smoking and black residue shooting out of the edge of the pad.

And this is what I saw when I lift the buffer!

I had a very strong urge to not tell the owner about it because I’m afraid of how he would react. But I told him anyway and decided before hand that I wouldn’t charge for this detail because the cost of respraying the bumper would cost more than that.

But to my relief, the owner was very calm about it and said it wasn’t very obvious and paid me for the detail in the end!

This is like getting 9 A’s for SPM and then failing a subject and making it spoil the whole record. =(

Continuing with the detail,

The roof and spoiler received the same treatment.

And finally after about 18 hours of machine polishing, tape is removed and whole car is pressure rinsed to remove polishing dust. Dried with a Meguiar’s Water Magnet using the blot technique to prevent marring as I found that this paint is *VERY* sensitive and is *EASILY* scratched.

Then a coat of Finish Kare 1 Pink Wax and some pictures under sunlight! The owner arrived shortly after to pick up the car.

Greatly appreciate K.Y from Osren for helping me out on the hood and to the owner for his tolerance on the mishap on the rear bumper.

As always, thanks for looking and feel free to ask if there are any questions =D

P.S My work isn’t perfect because under sunlight there are still some holograms in certain areas. Still have to hone my technique. And also to invest in another lighting source as halogens can’t really show holograms even after a solvent wipe down.

P.P.S Next detail may be a Black Proton Putra for the Hexa Infinite Marketing team who will be getting it repainted because of the bad condition it is in. And afterwards no more details until July because of my exams in June.