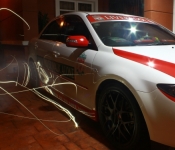 I’ve had a Mazda 6 in recently in for a GTechniq C1 coating. The owner wanted the best that I can offer, but when the car came in, it was practically swirl-free.

It is waxed frequently and I couldn’t really do much to improve it in terms of correction.

The car had very heavy orange peel, as with most OEM paints nowadays.

After the usual washing stages, prep work were as follow:

Orange peel was reduced by about 50%-80%, the most being on the front bonnet. I did not dare go further as I don’t have a PTG.

The Osren P40 compound is a local(Malaysia) contender to the Farecla G3, just a little bit less aggressive and with bit more lubes.

With the paintwork relatively flattened, there was a definite improvement to overall reflection and gloss.

With the prep work all done, I gave the car a wash to remove all the dust from the seams and wiped it dry in preparation for the protection stage.

G|Techniq C1 Crystal Lacquer was the weapon of choice.

After 8 hours of un-accelerated curing (no hair dryers, heat guns, etc.), I gave it a G|Techniq C2 Liquid Crystal wipedown at QD concentrate to give it some slickness and to remove any light dust prior to collection.

Poorboy’s Wheel Sealant was applied to the wheels.

Here’s a new technique called kung-fu buffing. After 300 hours of zen meditation, one is able to wipe at the ‘speed of light’, producing the highest level of shine possible. Wachaaa!

I then gave the owner a spray bottle of C2 at QD concentrate and some MF cloths for him to do his own maintenance of the C1 coating.